What Is Female Abdominal Pain?

Pain in the abdomen occurs more in women than it does in men. 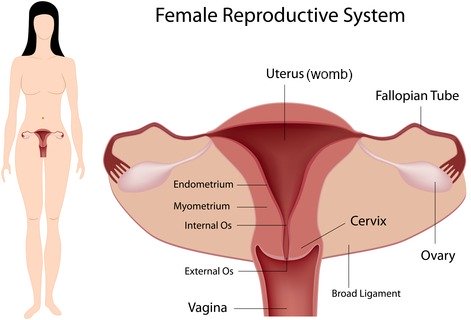 The presence of the uterus, ovaries, Fallopian tubes, cervix and vagina in a women means that females have more organs to worry about than their male counterparts.

Often, the cause of abdominal pain in a woman can be pinpointed with a good degree of accuracy, especially if it relates to causes like menstrual pain, pelvic inflammatory disease, irritable bowel syndrome or labour pain.

In some other cases, the cause of such pain in the abdomen will not be discovered, even after extensive investigations. Thankfully, conditions that cause pain in the abdomen for women is often not serious and do not lead to any long term health problems.

Common causes of abdominal pain in a woman include:

As with any part of the body; injury, infection or cancer affecting an organ in that region or nearby region is what commonly leads to pain.

Organs In The Female Abdomen

Women tend to suffer with conditions like gallstones, cholecystitis and irritable bowel syndrome and a few other non-female specific diseases more than their male counterparts despite both sexes having these organs. 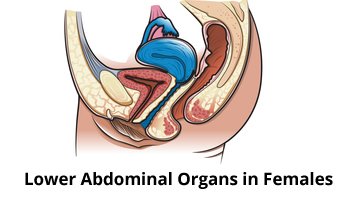 In addition to that, the unique reproductive organs found in women also brings additional causes of pain. Let us examine each of the four parts of the abdomen in a woman and see what can go wrong and bring pain in the abdomen.

Organs in the right upper abdomen that commonly cause pain in women include:

Organs in the right lower abdomen that commonly cause pain in women include:

Organs in the left upper abdomen that would commonly cause pain in a woman include:

Organs in the left lower abdomen that commonly cause pain in women include:

Lower Central Abdomen (Below The Umbilicus)

Menstrual pain is the most common cause of abdominal pain in women of child bearing age (approximately between the ages of 11 to 55 years old). It causes a cramping and lower central abdominal pain below the umbilicus a day or two before the time of the period.

A recent report revealed that 1 in every 2 women have some degree of period pain around the time of their menses and in up to 1 in 10 women the pain could be so serious that it affects their daily life.

To relieve the pain you can take pain killers and anti-inflammatory medications like ibuprofen or mefenamic acid to control the pain.

In very severe cases, you may need to use a combined contraceptive pill to overcome the pain. It is important to discuss with your doctor about your suitability for such use. You can read more on menstrual pain here.

Mid Cycle Pain is also called mittleschmerz and is another very common cause of lower abdominal pain especially in young girls between the ages 11 to 30 years old. Some people refer to it as ovulation pain and it causes pain in the middle of the menstrual cycle (usually two weeks after a period). The pain may be on the right or left lower abdomen and be sharp or a dull ache which lasts for a few hours to a few days.  It usually resolves on its own and does not lead to any serious problems. Read more on this here.

Because women have a very short urethra, they tend to suffer more with urine infections or cystitis than men.

The features of urine infection include:

If you think you might be suffering with an urine infection it is best to see your doctor to get some antibiotics. Some women find that taking potassium citrate medicine bought from the chemist without a prescription helps. So too does drinking cranberry juice. Please read more on this here.

Constipation is a common cause of abdominal pain in both men and women. A few days ago, a 34 year old lady came into the Emergency Department with a 5 day history of severe pain between her vagina and anus. She claimed to have been opening her bowel normally. She is however known to suffered with constipation in the past.

Examination of her abdomen revealed mild to moderate pain on pressing down on the tummy. An internal examination of the rectum with a gloved finger was met with a big bulky stool impaction. When she was told that her pain was due to constipation she insisted that it is not possible. As a precaution, a routine blood test was done on her just in case something was being missed. Her urine was also tested. Both of these came back normal. An abdominal x-ray showed a big shadow of faeces stuck in her lower rectum. She was astounded. You can read about symptoms and treatment of constipation here.

Irritable bowel syndrome or IBS is a common cause of abdominal pain in women and it affects 3 women for every man with this condition.

It is not an illness that makes people unwell or lose weight but there could be bladder symptoms, including waking up at night to pass urine. You can read more about IBS here.

Often referred to as PID, pelvic inflammatory disease is the infection of the womb and fallopian tubes usually due to a sexually transmitted disease from the vagina and cervix. Gonorrhoea and chlamydia are the most common causes of PID in people with multiple sexual partners.

It can also be caused by other infections spreading from the vagina, up through the cervix to the womb and not due to a sexually transmitted infection.

It is a very common cause of lower abdominal pain in a woman.

Symptoms of PID include:

Diagnosis of pelvic inflammatory disease is made by examination and blood test. Vaginal swabs will also be taken and in some cases ultrasound scans will used.

Successful treatment is achieved using the right antibiotics like:

It is also important for your sexual partner to be treated to prevent re-infection. Contact your doctor if you suspect you may be suffering with PID. They need to test you to identify the specific bacteria responsible and then choose a matching antibiotic that will help clear the bug.

Endometriosis is a condition where cells that normally line the uterus are found in other parts of the abdomen or body where they are not supposed to be. These abnormally situated uterine cells then behave like the normal uterus, producing menstrual bleed at the end of each month. But the blood gets trapped, accumulates and irritates the surrounding organs and bowels causing abdominal pain.

Excess amounts of blood accumulating in a confined space leads to pressure and pain. The blood could form clots and adhesion, binding other structures like the intestines together too, causing obstruction.

Symptoms of endometriosis include:

Diagnosis of this condition is by means of ultrasound scan and laparoscopy.

There are many treatment options, including the use of:

You can read more on endometriosis condition here.

Female abdominal pain due to fibroid is common especially amongst women of African and Asian descent, who tend to have fibroids  more than their Caucasian counterparts.

Fibroids are abnormal lumpy growths of the muscles of the uterus, causing a hard stone-like mass on the wall or inside of the womb. They are also called womb stones, leiomyoma, leiomyomata, or myoma.

Fibroids often do not cause any symptoms unless they are big enough to exhaust their blood supply or cause obstruction in the womb or outside the womb. Only about a third of women with fibroids develop symptoms.

Symptoms of fibroids include:

An ultrasound scan of the abdomen is the surest way to diagnose fibroids.

Treatment options for fibroids depend on the number and size of the fibroid, as well as whether the woman still wants to be pregnant or not. Available options currently include:

See your doctor if you have any suspicion of a fibroid as a cause of female abdominal pain in you.

Ectopic pregnancy is the presence of a fertilized egg outside the womb. This is another common cause of lower abdominal pain in women of child-bearing age.

Symptoms of ectopic pregnancy include:

Diagnosis of ectopic pregnancy is made from the history, the findings on examination, blood and urine test to confirm pregnancy and an urgent ultrasound scan of the abdomen where possible.  Laparoscopy may be needed.

Female abdominal pain due to ovarian cyst comes in many forms. This can be due to:

The first three causes of ovarian cyst pain are indeed much more common than pain due to cancer of the ovary.

Symptoms of ovarian cyst pain include:

If you have any worries or fears that your abdominal pain might be due to an ovarian cyst problem, please see your doctor as soon as you can.

Female Abdominal Pain: Have Your Say!

Do you suffer with lower abdominal pain that has been going on for a while? Do you suspect that this might be due to any of the issues discussed above and would like to ask some questions? Or do you have a comment or would like to share your experiences here? We would really like to hear from you. Have your say. Post your thoughts here!

Im a 17 year old female and im NOT sexually active but during my previous 2 periods i felt pain only in my right abdomen , before that, all was normal. …

Hello, I'm 19, female, and in decent health. Last night, I was lying in bed ready to go to sleep when I felt pain that didn't feel like cramps or …

Pain in bladder and uterus area Not rated yet
About 4 days ago I started to experience discomfort in my lower abdomen (pain level 2-3 of 10). BM's were (are) difficult. I took softeners 2 days …

Pain under my belly button in the morning Not rated yet
Some strange things are happening to me lately. It started probably a few months before October when i brought myself to the emergency room at 5am …

The presence of the womb makes women more prone to developing pain in the abdomen, compared with men.

If you have abdominal pain that is not described amongst the top ten common types of pain on this page, please feel free to contact us for specific questions relating to your experience with your abdominal pain.

Do not ever delay consulting your healthcare provider if you have a new onset or severe abdominal pain.

Information on this site or obtainable from our online doctors service is for information purposes only. They must not replace a one-to-one consultation with your healthcare provider who, amongst other things, knows your whole medical history better.