Magnetic resonance cholangiopancreatography is a non invasive test that uses MRI to examine the liver ducts, gallbladder, bile ducts and its drainage system as well as the pancreas. The pictures are often developed in 3 D for more details. 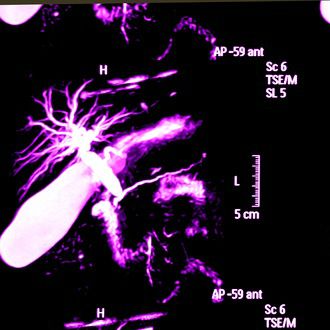 The biliary system is made up of organs and the ducts that connect to it, which produce and transport the chemical substance called bile.

It includes the liver channels, bile ducts, gall bladder, and the channels that drain from the pancreas.

Bile is produced and secreted from the liver cells into small ducts, or tubes, that go through the liver and form a right and left hepatic duct.

The word “hepatic” refers to something belonging to the liver. These two ducts join together to form a single duct which is called “the common hepatic duct.”

Bile is mostly made of waste products, cholesterol, and bile salts, and aids your digestive system by breaking down fats and carrying waste away. Then it all travels though the large intestine, where it is excreted as a bowel movement. Bile is yellow-green or brown, and that is what makes your bowel movement brown.

Why Did My Doctor Order A Magnetic Resonance Cholangiopancreatography, MRCP? 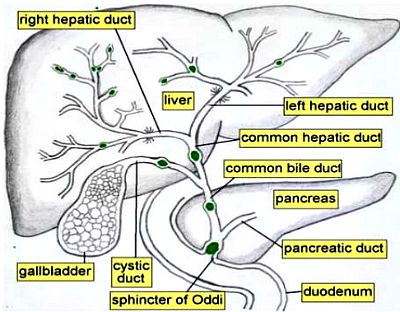 When your doctor wants to look at your biliary system, also called the biliary tree, he or she can perform a test called ERCP or endoscopic retrograde cholangio pancreatography.

However, this test uses an endoscope, which is a thin tube that must be placed through your mouth and guided down your esophagus, through your stomach, and into the small intestine.

It has the risk of causes pancreatitis (inflammation of the pancreas,) or perforation of the digestive tract.

Additionally, you have to undergo sedation for the ERCP. Other tests which may show similar images are a cholangiogram or a pancreatogram.

These tests are also invasive.

The magnetic resonance cholangiopancreatography examination on the other hand, is not invasive, and can give your doctor very good images of the areas of the biliary system or of the pancreas, a digestive organ located by the small intestine that produces digestive hormones and insulin.

If available, it is a preferred test to the invasive ones described above.

The following are common reasons why your doctor would request an MRCP test for you:

Some causes of these problems may be due to:

Because a magnetic resonance cholangiopancreatography is a non invasive test, no treatment procedure is possible with this.

How Is MRCP Performed And What Are Its Risks?

As described above, MRCP is a form of MRI scan or magnetic resonance imaging test.

A magnetic resonance imaging test is a test which uses a magnetic field and the energy of radio waves to create images of the structures and organs of the body.

When compared to other tests of imaging, including radiography, ultrasound tests, or CT scans, it gives different images, which are digital images that can be stored. A strong magnet is placed aimed at the body part that is being studied, which is usually placed in a tube-like structure.

Contrast material is usually not used in MRCP.