Barium Meal Test
Everything You Should Know

Barium meal is a special test where a substance called barium is given as a drink to coat the lumen of the stomach and small intestine, and then an x-ray is taken to reveal the outline or impression of the barium on the stomach and upper small intestine. It is quick, and painless. A small injection to help relax your lower esophagus may be necessary. 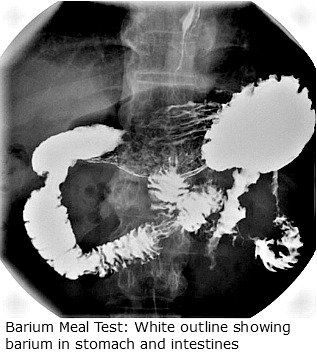 You will swallow a liquid with a material called barium sulfate, which will help your doctor see the shape of the organs in the upper gastrointestinal tract, by taking a series of X-rays after you swallow the barium. Barium is a non-toxic substance.

A barium meal makes your organs show up well on an X-ray, because it is “radiopaque”, which means the X-rays do not go through the material, and it shows up a light color on the film, outlining shadows of the lining of your lower oesophagus, stomach, duodenum and the upper small intestine.

A picture is shown to your right here of one X-ray taken during an upper GI series.

How Is A Barium Meal Test Done?

Barium meal test is easy to do.

The above steps are what is involved in a single contrast barium test.

There is another type of barium swallow test called a double contrast barium meal. In this test air is pumped into  your stomach to expand it even more, or the doctor may put some nitrogen or carbon dioxide in your stomach to expand it. The double contrast barium meal is even better for viewing details of the lining of the esophagus, stomach, and duodenum.

Usually a specialist called a radiologist will take the pictures, and he or she will interpret them before sending a printed interpretation to your doctor for your doctor to discuss with you.

What Is This Test Used For?

When you have a barium meal, there are some diseases in the digestive system that can be diagnosed by looking at the pattern of the barium in the esophagus, stomach, and duodenum. These abnormalities include:

Some symptoms, which may encourage your physician to order the barium meal test include the following:

How Should I Prepare For A Barium Meal?

Everybody needs adequate preparation before having a barium meal examination. This is to ensure that you get the best result out of the test. It is important that you do the following:

What Can I Expect During The Barium Test?

You will usually have the barium meal test done in the radiology department of your local hospital, but some doctors, specialists in gastrointestinal diseases, may be able to do it in their clinic.

In a few days, your doctor will have the results and he will call you to discuss them or perhaps you will be asked to make a clinic appointment if there are any problems that require treatment or further tests.

Are There Any Risks Involved With Having A Barium Test?

The risks involved with barium test examination are very small.

Possible Results And What They Mean

Now you have completed your barium examination. You return to see your doctor to discuss the result. What did the test show, you must wonder. The following are the possible results you can get from doing a barium swallow or meal test:

This means exactly what it says. That means there is no abnormality found on the barium study. For many conditions for which barium meal x-ray examination is requested, they can be picked up on the test if there is any abnormality.

Should the radiologist or your doctor still have any doubt as to the reliability of the test for your specific symptom, another test like a CT scan or MRI would be requested.

If there is a report of filling defect seen on your Barium test, it is an abnormal result. It means that your symptoms that led to a barium meal examination being requested might be due to:

Fold thickening in barium meal test refers to the presence of increased tissue shadow at  rugae or folds of the inner surface of the stomach. It is seen in conditions like:

This is a situation seen if the outlet of the stomach or duodenum is narrowed or blocked.

Have you had any experience with barium meal in the past? How did it go? What preparation did you have to make? How do you find the test generally? Would you be happy to do it again if necessary?

Or Are you preparing to have a barium test yourself? Is there something on your mind by way of question you would like to ask?

Post your thoughts here and start a discussion on this topic. We would love to hear from you.

See What These Other Tests Mean