An IVU or intravenous urogram, also referred to as intravenous pyelogram, is a type of test done by injecting a dye into your vein and then taking x-rays of the kidney, ureter and bladder, while the material travels through your urinary tract system. It is used in the identification of many abnormalities, including blockages, presence of kidney or bladder stones and tumors at any point along the urinary tract system. 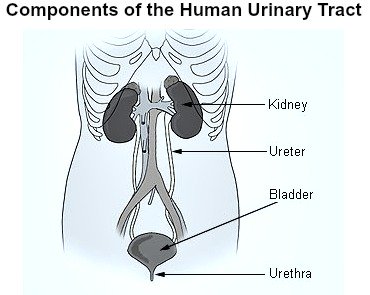 The kidneys are the upper part of the urinary tract system, and they filter all of the blood as it goes through your body, taking out waste components, balancing electrolytes, and producing  urine.

Filtered urine travels down tubes called ureters, which are thin muscular tubes, that is starts from each kidney to the urinary bladder that is located in your pelvis. From the bladder, your urethra, another, short tube, carries the urine outside of your body through an opening called the urethral meatus.

Any disease or blockage along this urinary tract could cause symptoms including abdominal pain. An IVU is one of the tests that could be used to look for what could have gone wrong inside our urinary tract.

There are many reasons a doctor might order an intravenous pyelogram.

You may have complained to your doctor about certain symptoms. Those symptoms that might indicate a problem with your urinary tract include:

What To Expect During An Intravenous Urogram 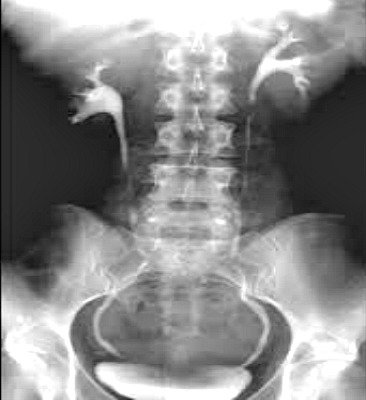 Picture of an intravenous urogram film highlighting the shadows of the contrast materials (white) emanating from each kidney.

An intravenous urogram is normally done in the radiology suite. The test is done by an X-ray technician and the results are interpreted by a doctor who reads radiologic studies, known as a radiologist.

You will take the test while you lie on an X-ray table, and the “scout” film, a plain radiograph of your abdomen, will be taken first, to be examined by the radiologist. This is to show that you are in the right position and that there is nothing abnormal that is visible on the scout film.

The test will take about an hour, and afterwards you should drink a lot of fluids to flush the radioactive contrast material out of your body.

The radiographic pictures do not hurt at all, but the X-ray table may feel uncomfortable after a while. If you have to hold a position, it may also be uncomfortable. When the needle pierces your skin, it may feel like a prick or a sting, and when the contrast dye is injected, you may feel a warm flush.

Some people complain of a salty taste or a metallic taste in their mouths during the test. The compression belt may feel snug or uncomfortable. Some people may experience nausea or lightheadedness after the test.

How To Prepare For An IVU

There are several things that you should tell your doctor before you take the test. These things include:

Are There Any Risks To An Intravenous Pyelogram?

What Should I Expect After An Intravenous Urogram?