True Life Story Of Abdominal Migraine
Could This Be The Cause Of Your Child's Frequent Tummy Aches?

The Story Of Abdominal Migraine

We have presented a story of abdominal migraine culled from a National Newspaper that helps demonstrate how abdominal migraine, also called stomach migraine is easily overlooked or missed by doctors. If this sounds like your child, why not find more about this condition here and discuss it with your doctor? 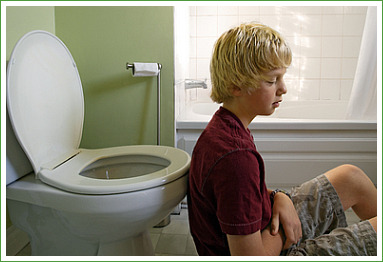 Actually, we are going to present two cases of abdominal migraine to help highlight the pattern of this illness and why it is important to have a very high index of suspicion to recognize and treat it.

But what is abdominal migraine?

Abdominal migraine is a condition not too well understood by doctors, that is actually a variant of migraine, commonly seen in children (one in every 10 child on the average). It is characterized by frequent episodes of upper or mid-line abdominal pain (around or above the belly button), lasting for hours to a few days, associated with feeling nauseated, repeated vomiting, lose of colour, and irritability. They may be an accompanying headache sometimes.

This is a story culled from the Mail Online newspaper of 7th of September 2010.

It reports about a boy age 8, called Owen Dique. Whenever he was invited to a party, or gets a treat or even if they were to go on holiday, her mum Joanne, had to keep such information away from him until the very last minute. Not even would he be told of his birthday party and if celebrated, has to be kept low-key.

Chocolate is a no no for him.

This is "not a question of keeping Owen in suspense or denying him fun", the paper reports. The reason for all these? Because any information or activity that causes excitement or anxiety of any sort in this pleasant boy, right from the age of two or so, triggers:

The mum reports that Owen will clutch his tummy, and dash off to use the loo urgently and then within minutes, "flake out asleep for hours". The story continues "By the time he was about two, he would have bright yellow ­diarrhoea about once a month — but the GP put it down to toddler diarrhoea,’ says Joanne, 41, a nursery nurse from Brighton".

At age six, he also developed an associated headache with the above symptoms (could it be that he has always had headache with it, but being a child he could not explain this to the parents?). After lost of consultations, he was finally referred to a paediatrician on a migraine clinic who diagnosed Owen has having a very common form of migraine in children, called abdominal migraine. This is a very common cause of frequent abdominal pain in a child, often miss-diagnosed as acute appendicitis, or tummy bug or even anxiety.

Once Owen was placed on pizotifen, he responded very well to treatment and that was the end of his frequent tummy aches and miserable abdominal pain.

Interestingly, the paper reported that when about 40,000 adults who suffers with migraine were interviewed, "As many as 70 per cent of migraine sufferers said that, looking back, they had had the condition as a child — but no one picked up on it." - Underlining, ours.

This is a story of abdominal migraine reported in a leading book on childhood migraines, written by Dr Charles F. Barlow, reporting several useful cases, called

Headaches and migraine in childhood (Clinics in developmental medicine)

It reports of a six year old boy, who from the age of three, is frequently seen by doctors with recurrent episodes of abdominal aches. "The episodes consisted of diffuse severe abdominal pain of about one hour in duration. He was noticeably pale and distracted", reports the book. It continues "On one particularly memorable occasion, the abdominal pain began at the check-in counter of an airport and became very severe over the period of 10 to 20 minutes."

It went on to narrate how the pain continued inflight, with vomiting, and at a point, this six year old boy actually "passed out", losing consciousness it seems, for two minutes. On waking up, he was confused for a short while off and on.

He has, before now, had this frequent abdominal pain investigated, having had various blood tests, and endoscopy, all of which were normal.

He was taken taken to another hospital, where abdominal migraine was suspected, had a special brain scan (EEG) that picked up the abnormal wave pattern that is often seen in those children with abdominal migraine.

He was placed on treatment for abdominal migraine and cured of his recurrent abdominal pain.

A further digging into the history of the family of the boy revealed that "both mother and father had paroxysmal headaches with throbbing quality and nausea. His maternal grandmother had classic migraine."

So, if your child is having frequent tummy ache and has been to see the doctor several times and nothing seems to be identified as the possible cause of the pain, it is time to look closer and see if it could be due to abdominal migraine. But, abdominal migraine must be diagnosed, only after testings have excluded other common causes of abdominal pain in children.

The following are common causes of abdominal pain in children, that could mimic abdominal migraine:

Abdominal Migraine - Tell Us Your Story

Do you have a great story or experience about abdominal or stomach migraines? Share it! Tell us your story.