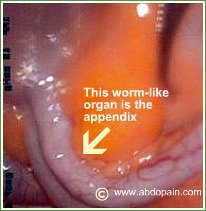 The appendix was once thought to be a "vestige" or remnant tissue in our gut that has no use. It is only in the last few years that a better understanding of the function of the appendix has developed.

It has been demonstrated that the appendix, unlike its closest neighbor, the colon, contains numerous clusters of special type of white blood cells called B and T lymphoid cells. These clusters of special white blood cells also called "lymphoid tissue" are part of our immune or defense systems in the gut that mediates immunologic function to protect the body from invasion by harmful organisms.

Appendicitis occurs when this wall of defense - the lymphoid system is overwhelmed.

It used to be believed that all acute appendicitis results from swelling and lumen obstruction of the appendix and subsequent proliferation of bacteria or viruses, leading to the disease. That view is changing.

Appendicitis has now been classified into three types based on the histology and process leading to inflammation of the appendix.

The three types of appendicitis are:

Step By Step Explanation of The Pathophysiology of Appendicitis And How it Relates to The Clinical Picture.

One of the main thrust of events leading to the development of acute appendicitis lies in the appendix developing a compromised blood supply due to obstruction of its lumen and becoming very vulnerable to invasion by bacteria found in the gut normally.

Obstruction of the appendix lumen could occur from a number of things, leading to a rise in intra-luminal pressure, which causes the wall of the appendix to become distended.

Things that could block the lumen of the appendix leading to the process of appendicitis include:

Normal mucus secretion continues within the lumen of the appendix, thus causing further build up of intra-luminal pressures. This in turn leads to the occlusion of the lymphatic channels, then the venous return, and finally the arterial supply becomes undermined.

The wall of the appendix will thus, start to break down and rot. Normal bacteria found in the gut gets all the inducement needed to multiply and attack the decaying appendix within 36 hours from the point of luminal obstruction, worsening the process of appendicitis.

This leads to necrosis and perforation of the appendix. Pus formation occurs when nearby white blood cells are recruited to fight the bacterial invasion.

The content of the appendix (faecolith, pus and mucus secretions) are then released into the general abdominal cavity, bringing causing peritonitis.

In some cases, this perforation could be sealed off by omentum, leading to contained appendiceal abscess with less rapid deterioration seen in the patient.

So, in acute appendicitis, bacterial colonization follows only when the obstruction and cutting off of the blood supply of the appendix occurs. The early stage of this process is what is seen in mucosal appendicitis.

These events occur so rapidly, that the complete pathophysiology of appendicitis takes about one to three days. This is why delay can be deadly!

The pathophysiology of appendicitis obviously correlates with the clinical picture.

Acute appendicitis pathophysiology follows the same pattern, even in children and pregnant women.

In the elderly, the pathophysiology of appendicitis remains unaltered, but the inflammatory response generated by the elderly is often less than that seen with young fit individuals, accounting for the often benign presentation froth with a tendency to missing the diagnosis, thus courting more complications.