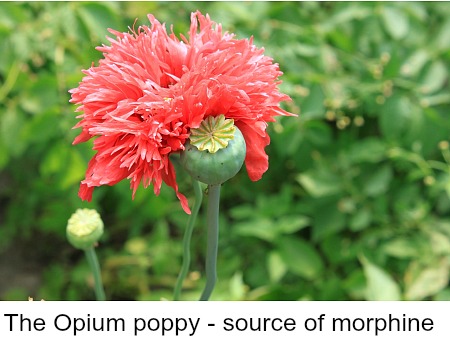 Morphine, a pure alkaloid, isolated from the opium poppy in 1803 was so named after the Greek god of dreams, Morpheus, because of its known effect to cause a pleasant feeling of floating outside the body with reduced pain sensation "as if in a dream world".

All other opioids are compared against the strength and effects of morphine.

What are opioids commonly used? Here are the names of opioids often prescribed and used for both medical and recreational purposes. They include:

Opioids bind to and stimulate receptors in our brains, bringing about reduced sensation of pain and other effects. Opioids are used for:

No other group of medications are so effective in the control of severe and chronic pain like opioids. Thus they are widely prescribed for the control of pain from cancer, post-operative pain and other types of pain unresponsive to other pain killers.
Opioids are nevertheless well known to cause physical and psychological dependence leading to addiction and abuse.

Dangers of Opioid Use