The differential diagnosis of appendicitis or conditions commonly confused for appendicitis include any illness that could lead to new onset pain on the right lower abdomen, around the spot where the appendix is found. We bring you a comprehensive list of such mimickers of acute appendicitis and how to differentiate them from appendicitis. 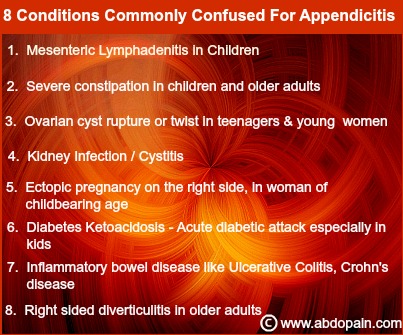 Do you or your loved one have pain on the right lower abdomen and wondering if this is appendicitis or not?

Or have you taken your kid to see the doctor and you've been told that his or her pain is not likely due to an acute appendicitis?

Are you asking yourself: "If it is not appendicitis, then what is it"?

Well, there are many conditions that mimics appendicitis. They are referred to as differential diagnosis of appendicitis.

In order to avoid an unnecessary surgical operation on an appendix that may not be inflamed, or even more importantly, not miss the diagnosis of a condition more serious than appendicitis with potential to cause fatality within hours or a few days, it is crucial and extremely important that these "differential diagnosis" or mimickers of appendicitis be considered any time anyone develops signs and symptoms thought to be due to appendicitis.

Yes. A more swiftly fatal but easily remediable medical condition can be missed with ugly results if a consideration is not given to the differential diagnosis of appendicitis. An example no one would like to miss would be an ectopic pregnancy in a young lady presenting with right lower abdominal pain or even diabetic keto-acidosis in a child not previously known to have diabetes.

Let's list the more common conditions that mimic appendicitis and then discuss how to differentiate a few of them from acute appendicitis.

The common conditions that could be confused with appendicitis are:

Let us now discuss the top common ones.

This is also called non specific mesenteric lymphadenitis. It is a condition commonly seen in children, though can occur at any age.  The lymph nodes or glands on the wall of the small intestines become swollen or inflamed, causing pain in the abdomen.

Mesenteric adenitis usually follow a previous cold or virus infection within or in the preceding two weeks before the onset of the abdominal pain. They might have had a throat infection or still does.  If you child has had cough and running nose and running nose or sore throat within the last two weeks or still has it now and then complains of abdominal pain, then it is likely that he or she is having mesenteric lymphadenitis.

Typically, you can differentiate mesenteric adenitis from appendicitis by the following: 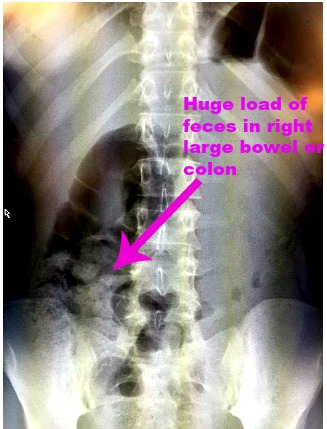 Severe constipation on the right colon could cause feces to distend the bowel, causing right lower abdominal pain, that can be confused for acute appendicitis.

Constipation is the infrequent passage of stool or passage of hard stools.

It is a very common cause of abdominal pain in children and adults alike. Though it is relatively easy to tell if you are constipated, sometimes, people are constipated without even realizing it.

If you have not opened your bowel as frequently or passed enough feces as much as you normally would, or even if the consistency of your bowel motion has hardened up in the last few days, it is most likely that you are constipated.

If you have a huge load of feces sitting inside the lumen of your large bowel, you can imagine the tension it could cause inside by distending the bowel wall and causing abdominal pain.

Constipation could also be a feature or symptom of acute appendicitis.

So, how can you tell if you are having just constipation or if it is a part of the symptom complex of acute appendicitis?

Let's take a look at the other symptoms of appendicitis vs constipation here. 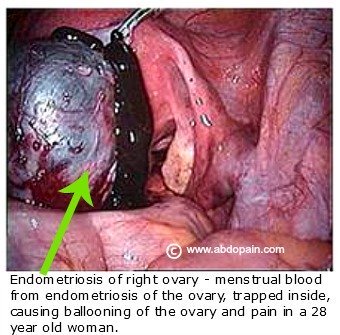 Problems with ovarian cyst are among the top causes of unnecessary surgical operation in young women.

The ovary is where eggs are produced in a women.

Each ovary has thousands of eggs and once every month, usually in turns, they release eggs by a process known as ovulation. This roughly occurs around the middle of a woman's cycle - around two weeks after the last menstrual period.

The released egg leaves behind the sac from from which it is expelled. Sometimes, a woman may bleed into the sac, leading to the formation of cyst filled with blood. This could lead to pain in the abdomen. If this happens on the right side, it could lead to right lower abdominal pain which then mimics an acute appendicitis.

For some reasons, some of such cysts forms an hormone releasing sac or ovarian cyst referred to as corpus luteum cyst. These too could lead to abdominal pain.

As can be seen on the picture here, an ovarian cyst could also become filled with endometriotic collection, distending the cyst significantly, causing right lower abdominal pain.

Another way that an ovarian cyst could cause pain and become a differential diagnosis of appendicitis is it it ruptures or twist on its stalk. This would lead to very sudden severe lower abdominal pain that spreads down to the right hip and upper thigh, as well as lower back, if this is occurring on the right side.

So, how can you differentiate the pain caused by an ovarian cyst vs those caused by acute appendicitis?

This commonly occurs within the Fallopian tubes. As the fetus grows, the lumen of the tube becomes far too narrow for it, and the tube may rupture, leading to loss of the baby and massive bleeding from the large blood vessels within the tube. Within hours, a woman could loose all her blood volume into the abdominal cavity. Sometimes, the bleeding may be minimal if it is just a crack on the wall of the tube … a leak instead of torrential blood loss.

Such women will come up with sudden onset right sided lower abdominal pain, may vomit, and even have mildly raised temperature, and other signs and symptoms of appendicitis. She may not be aware she is pregnant, since leaking or ruptured ectopic pregnancy usually happens within the first 6 – 8 weeks of pregnancy (just when she realizes that she has missed her period or menses).

Clearly, ectopic pregnancy is a very important differential diagnosis of appendicitis in all women of childbearing age - from age 13 to 59! If you or your young daughter suffers with a right lower abdominal pain, it is important to have a pregnancy test done if there is the slightest chance of pregnancy, to exclude this condition.

The following are differences between appendicitis and ectopic pregnacy: 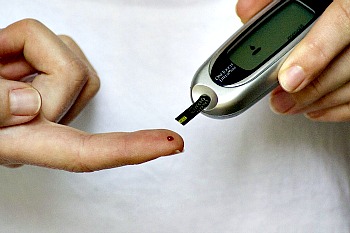 Patient having her blood sugar level tested. Diabetic Ketoacidosis is another common cause of lower abdominal pain especially in children.

Diabetic ketoacidosis is a dangerous condition that occurs when the amount of sugar in the blood is too much and the cells are unable to utilize it due to abnormal metabolism seen in people who are diabetic. Their cells instead, start breaking down fat in their liver and under their skin, leading to the production of very large amount of ketones and acid.

It leads to rapid dehydration of the body, abdominal pain, increased rate of breathing, tiredness, vomiting and within 24 hours, many suffers would slump into unconsciousness. It could be rapidly fatal if not diagnosed and treated promptly.

Diabetic ketoacidosis tends to happen in patients with type 1 diabetes.

On many occasions, children have been brought into an emergency room or department with complaints of lower abdominal pain, not eating, very thirsty with fever and initially thought to have acute appendicitis, only to find out during routine testing that it is indeed a case of diabetic ketoacidosis (DKA).