Areas of the abdomen

Understanding The Various Areas Of The Abdomen In Medical Terms, The Organs And Associated Diseases And Conditions Common To Each Area.

These are the 9 areas of the abdomen in medical terms and what they contain as well as the common causes of pain or illness in each of these areas or regions of the tummy. You would be use more precise medical terms when describing where your abdominal pain is located. 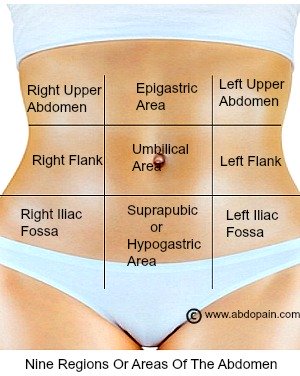 These are the nine areas or regions of the abdomen in medical terms.

The human abdomen has been divided into 9 arbitrary regions or areas for ease of description of an area of pain, swelling, injury or incision.

Each of these regions contains a number of organs.

Injury, infection or any other type of disease affecting any of the organ domiciled in an area of the abdomen could cause pain in that vicinity.

A clear understanding of the anatomical boundaries and descriptions of these regions of the abdomen would be helpful in providing a uniform term when such pert of the abdomen is been referred to. It may also help you in being able to communicate more specifically with your healthcare provider when describing you abdominal pain.

The nine areas of the human abdomen are:

The upper horizontal line is sometimes drawn at a slightly different levels by some doctors, at the level of the midpoint between the tip of the pubic bone in the middle and the mid-line notch at the top of the sternum.

You can see these areas well represented on the picture of the areas of the abdomen on this page.

The Four Quadrants of The Abdomen

Some medical authorities instead, prefer to keep thing simple and divide the abdomen into four regions or true quadrants.

Another imaginary line, this time horizontal, is drawn from one side of the abdomen to the other side, at the level of the navel of umbilicus.

Which of these descriptions do you find more useful: that of the 9 areas or the 4 quadrants? And why? We would really love to hear your views on the comment box below.

Referred Pain Away From The Areas of The Abdomen 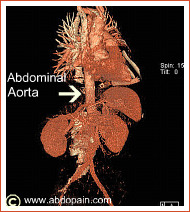 Injury or diseases affecting organs in some of these arbitrary regions of the abdomen could also cause pain in other areas of the body far away from where the diseased organ is.

Such pain caused by injury or disease in one area of the body but felt in another part of the body is called "referred pain".

Common examples of referred pain from abdominal injury or disease process are:

Referred Pain To The Abdomen Regions

Examples of such are:

Let us now take a look at each of these areas or regions of the abdomen, the organs found there and common causes of pain in each of them.

Published on the 31st of October 2015 by Abdopain.com Editorial Team under Areas of the Abdomen.
Article was last reviewed on 1st November 2015.